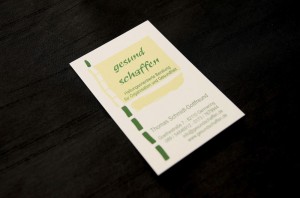 Thomas Schmidt-Gottfreund works as a health coach under the motto of creating healthily.

A person with passion and intuition for interrelationships, with many years of coaching training behind him.

A trained machine fitter with a subsequent Civil engineering studies and long professional experience as a production engineer and with both feet firmly anchored in professional reality.  Master of the black belt in Aikido, and  awarded with the third Dan.

A man of many facets, therefore, in whom the other sides of his personality always shine through in everything he does. This complexity is summarized and expressed as a metaphor in his business card, which König Konzept was allowed to realize for him. 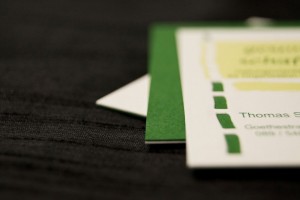 The logo of healthy creation is a flag with bamboo rod. The appearance of this bar is reminiscent of a human spinal column at the same time.

The hard burrs created during laser cutting would not communicate in a haptically congruent way – the mechanics of the punching process, on the other hand, create soft contours. 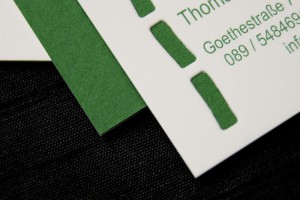 Thus, we have very carefully and hardly noticeably adapted the logo to the technical possibilities of filigree punching.
adapted: The individual links are adjusted to a distance of about the edges are minimally rounded.

In addition, we were able to avoid the slight traces of gunpowder which lasering would cause and which would appear very unattractive on the white cardboard (Colour Matters Pristine White).